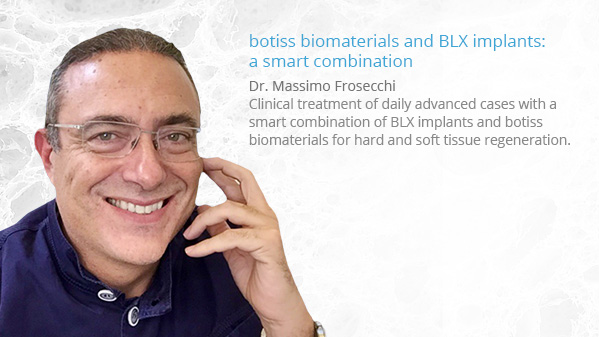 Clinical treatment of daily advanced cases with a smart combination of BLX implants and botiss biomaterials for hard and soft tissue regeneration.

A brand new tool was recently launched in the implant market: Straumann BLX. The use of this new device is specially indicated in case of poor quality or quantity of recipient bone or in case of high primary stability need.
In most of fresh socket implants clinicians face the need to graft hard and/or soft tissue to maintain or recreate adequate volume, respecting tridimensional correct implant placement.
The wide range of botiss biomaterials offers many different possibilities for hard or soft tissue grafting.
The combination of different botiss biomaterials and BLX implants represents a unique and smart solution for daily advanced cases.