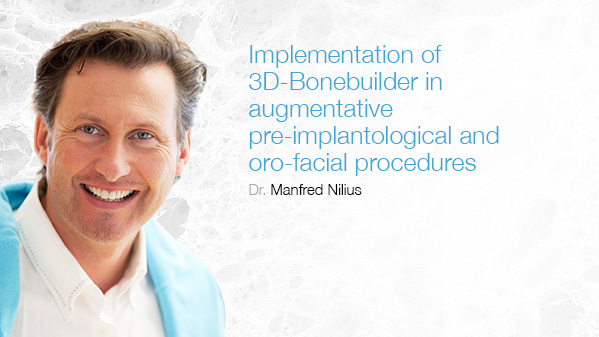 Defect ostoeoplasty is often the beginning of dental recovery, since it is necessary for dental implantation.

Bone-augmentation can be made as onlay osteoplasty and interpositional osteoplasty. Autologous grafts (autografts) from hip, rip, calvary or intraoral cavity is ment as gold-standard for augmentation in any case. Disadvantages are higher morbidity of the donor-site or prolongation of operation time due to manual modelling of the bone. Therefore onlay osteoplasty can be performed using allogenic prefabricated 3D-Bonebuilder in different clinical indications instead of autografts. In some cases it is useful to combine orthognathic-surgery with bone augmentation. Comparing these different approaches – the lecture will show how to perform block graftings, onlay-osteoplasty, sandwich-osteoplasties and other techniques. Various casuistics are presented - from simple alveolar augmentation to full-arch maxillary reconstruction, from anterior maxillary reconstruction to facial recontouring

Participants will learn about the possibilities and different methods of augmentation, decision making of indications and safe use of customized allogenic block transplants.

Dr. Nilius graduated with his MD in Germany (RUB; Bochum) and France (Louis-Pasteur-University) in 1993 and his DMD 1999 in Munich. From 1999 to 2004, he attended the University-Hospital Bochum, Freiburg and Zurich for cranio-maxillofacial surgery and received his DDS in computer assisted maxillofacial surgery 2004 in Hanover. Dr. Nilius has been a visiting surgeon in maxillofacial surgery clinics in different european countries. Within the medical license for Spain and England Dr. Nilius has been Chairman of the European Institute for facial and dental aesthetics, [EUGEZA Birmingham; Dortmund] since 2005 and Director of the Niliusklinik in Dortmund (www.niliusklinik.de).

Since Dr. Nilius has been participant of the Operation Smile International, Romania 1994, he organized facial-reconstructive programs all over the world. Dr. Nilius has been awarded: the Annual award for Chemistry of the German “Jugend-Forscht”-Association, the Annual Dentsply-Prize of the German Association for Dentistry and Oral and Maxillofacial Surgery (DGZMK/ BZÄK 2000), as well as presenting Best-Prize-Scientific-Poster during the NB-World-Tour Germany (Dresden 2006), NB-WT BeNeLux (Maastricht 2008) and Best-Poster Worldwide (Las Vegas 2007), 2ndPrize Scientific-Poster (SIC-Academy-Award, Vienna 2014).