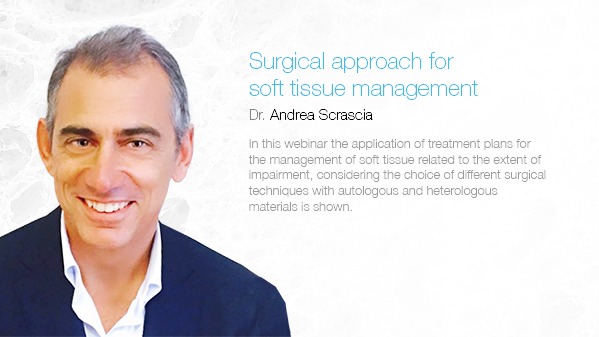 In this webinar the application of treatment plans for the management of soft tissue related to the extent of impairment, considering the choice of different surgical techniques with autologous and heterologous materials is shown.

We will evaluate clinic parameters that allow us to manage the surgical goals with a logical method. We will also explain the use of connective graft substitute during surgical procedures.

Doctor Andrea Scrascia graduated in Dentistry at the Catholic University of the Sacred Heart in Rome in 1991.

From 1993 to 1996, he had the teaching role as professor on contract for Dental Prosthodontics at the Odontostomatolgy and Dental Prosthetics specialization at the Catholic University of the Sacred Heart in Rome.

During the academic years 2001-2002 and 2002-2003, he had the teaching role as professor on contract at the Dental Hygiene degree course at the Tor Vergata University in Rome.

During the academic years 2002-2003, 2003-2004 and 2004-2005, he had the teaching role as professor for Oral Implantology and Prosthetic Restoration at the International Master at the La Sapienza University in Rome.

In 2002, he earned the PhD at the La Sapienza University on an experimental study on biomaterials used for implantoprosthetic rehabilitations.

He attended international courses and congresses as speaker on periodontology and implantoprosthetics.

He is author of more than 70 scientific publications.