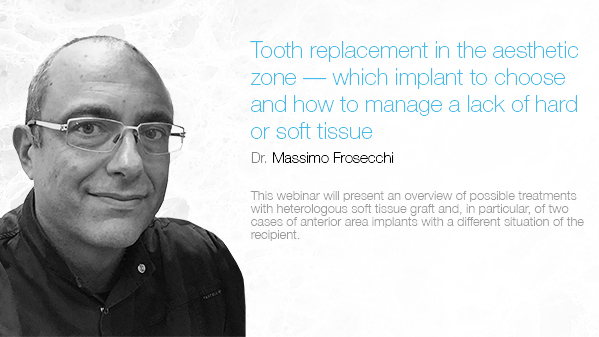 This webinar will present an overview of possible treatments with heterologous soft tissue grafts and, in particular, of two cases of anterior area implants with a different situation of the recipient.

Osseointegrated implants in the aesthetic area should always be considered as an advanced or complex treatment. In order to obtain stable and good results in all anterior area implants cases, it is crucial that clinicians respect and maintain the soft and hard tissue architecture.

The implant must be applied strictly respecting the threedimensional correct position and maintaining a sufficient amount of bone, especially in the buccal aspect of the crest. The correct coronal-apical positioning can differ depending on the type of the implant: bone level or tissue level.

In most of the cases, there is the need to increase them to reestablish a normal “pink aesthetic” as an ideal frame for “white aesthetic”. Biomaterials represent a valid support for the aesthetic implant cases, both for hard and soft tissue. In particular, heterologous soft tissue graft can be used in several applications and techniques, combined with implants or with additive techniques, such as GBR.